A few words about heraldry and "Family Crests"

First, there is no such thing as a Fagan family or a Fagan surname 'coat of arms'. According to experts in Heraldry, 'Arms' were (and are) granted to individuals (and their direct descendants). Patrick O'Shea1, one such expert, writes, "Most of these examples of armorial bearings originated as English Grants of Arms in the late Medieval or early Renaissance periods. Today the regulation of armorial bearings in Ireland is handled by the Chief Herald of Ireland or the U.K. College of Arms (in Northern Ireland), and both authorities continue to make new grants of arms to worthy individuals."

Heraldry was brought to Ireland with the Anglo-Normans in 1169 A.D. The Irish nobility began adopting this type of heraldry during the next centuries. But Ireland was not devoid of heraldic symbols of its own. O'Shea writes that "It seems clear, then, that the use of personal standards, belonging to the chief of a sept, which passed to his successors, had long been practiced by the time of the Battle of Magh Rath (A.D. 637 - Annals of Tigernach), and that the adoption of the English system of heraldry was merely an evolutionary step in an already well-established Gaelic tradition."

The ancient Irish had their own system of symbols that were later sometimes adapted to the Norman system. The symbol or picture displayed on an Irish banner was called a suaicheantas or samlach. Each clan's symbol was unique allowing men to easily be distinguished "from all others by those shanachies whose duty it was to attend the nobles when about to contend in battle, and that these shanachies might thus have a full view of the achievements of the combatants, so as to be able to give a true account of their particular deeds and valor." From the Description of the Battle of Magh Rath (637 AD), "For it is there read, that the whole host was wont to be placed under the command of one captain-in-chief, and that under him, each division of his force obeyed its own proper captain; and besides, that every captain of these bore upon his standard his peculiar device or ensign." (Keating2)

The question of 'family or Clan arms' is one which is summed up by O'Laughlin3: "Treating arms as if they belonged to a family, is a practice which is not entirely proper - for arms are granted to, or held by an individual - not a family in the traditional way of things. But then Ireland was not an entirely proper example. Anciently there was a claim of the entire 'Irish Clan' to the ownership of the land, and to the naming of a Chief. The Irish clan held the land and the chieftancy, (and its arms then), somewhat in common. In Ireland, the chieftainship might pass to a cousin, not just a son of the chief. So grew the practice of male descendants using the arms, rather than just the oldest son. Hence comes the concept of arms belonging to the Irish clan as a whole, not just a single individual."

Please don't get hoodwinked by "family coat of arms" websites (what students of Heraldry call 'bucket shops'). There is even a website called "The Great Irish Clan Gathering4" that will print out a very nice certificate with "the Fagan Clan Arms [sic.] " and the names of two 'Fagans' as 'signatories'. (I can only assume the signatures are imaginary). Ancestral Findings5 states, "...actually having a coat of arms or family crest is much more rare than you might imagine. Having the hereditary right to use it is even more rare." The College of Arms6 in the UK states, "There is no such thing as a 'coat of arms for a surname'." and the Chief Herald of Ireland7 states: "There is, strictly speaking, no such thing as a ‘family coat of arms’. A grant of arms made to an individual extends to his or her descendants of the name, not to a family as such."

In my humble opinion as a researcher, genealogist and heraldic artist, it should depend under which system the original arms were awarded, English or Gaelic. By English custom, arms are in fact personal property and are inherited by direct descendants of the person who owns the property. If you are a member of one of the ancient Gaelic Clans or Septs and the arms are of Gaelic origin and recognized under that tradition, you may be eligible to utilize the arms. However, The arms typically shown for 'Fagan' have been recorded for specific individuals who happened to have the surname Fagan8.

There are Several Arms Attributed to Fagans 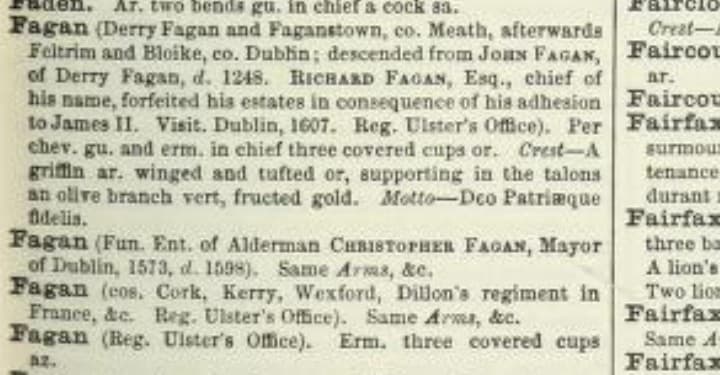 There are actually several Armorial Achievements listed for various individuals with the surname FAGAN. But remember, these were awarded or granted to specific individuals and/or their direct descendants, not just anyone who shares the surname FAGAN. To use them without proper matriculation is considered a usurpation of arms, or basically 'stealing property' that does not belong to you. These people, in some cases were granted arms due to some act of meritorious service to Crown or Country, or paid handsomely for their property:

1 Patrick M. O'Shea, Proto-Heraldry in Early Christian Ireland: The Battle Standards of Gaelic Irish Chieftains, (this original link is no longer active. Try this one for an archived copy).
2 Geoffrey Keating, The History of Ireland (BOOK I-II) (circa 1640) CELT: Corpus of Electronic Texts: a project of University College, Cork College Road, Cork, Ireland.
3 Michael C. O'Laughlin, The Irish Book of Arms. Kansas City, Missouri, USA, Irish Genealogical Foundation, 2000. ISBN 0-940134-86-1
4 "Join Your Clan." The Great Irish Clan Gathering. N.p., n.d. Web. 06 Aug. 2015.
5 "The Real Truth Behind Coats of Arms and Family Crests — AncestralFindings.com." AncestralFindings.com. N.p., 03 Dec. 2014. Web. 06 Aug. 2015.
6 "FAQs: Heraldry." College of Arms. N.p., n.d. Web. 06 Aug. 2015.
7 "Office of the Chief Herald FAQs." Office of the Chief Herald. National Library of Ireland, n.d. Web. 6 Aug. 2015.
8 Burke, Bernard. The General Armory of England, Scotland, Ireland, and Wales: Comprising a Registry of Armorial Bearings from the Earliest to the Present Time. London: Harrison, 1884. 345. Print.
9 The British Herald; or, Cabinet of Armorial Bearings of the Nobility & Gentry of Great Britain & Ireland, from the Earliest to the Present Time; with a Complete Glossary of Heraldic Terms: to Which Is Prefixed a History of Heraldry, Collected and Arranged .., by Thomas Robson, Printed for the Author by Turner & Marwood, 1830, p. 578.
10 A Complete Body of Heraldry: Containing, an Historical Enquiry into the Origin of Armories, and the Rise and Progress of Heraldry, Considered as a Science ... The Proper Methods of Blazoning and Marshalling Armorial Bearings ... The Arms, Quarterings, Crests, Supporters, and Mottos, of All Sovereign Princes and States ; as Also the Atchievements of the Peers, Peeresses, and Baronets, of England, Scotland, and Ireland. An Historical Catalogue of All the Different Orders of Knighthood ...: Glover's Ordinary of Arms, Augm. and Improved: an Alphabet of Arms, Containing Upwards of Fifty Thousand Coats, with Their Crests, &c. and a Copiuos Glossary, Explaining All the Technical Terms Used in Heraldry ...: Illustrated with Copper-Plates: Carefully Comp., from the Best and Most Undoubted Authorities, by Joseph Edmondson et al., Printed, for the Author, by T. Spilsbury, 1780, p. 52.

There are many versions of Fagan Arms as shown below. These were each attributed to an individual (and inheritable by direct descendants).

The last one is the one most offered for the "Fagan surname" by unscrupulous 'bucket shops'. This is against all norms of heraldic tradition and is akin to trafficking in stolen goods!

Per chevron Gules (red) and Ermine, in chief three cups covered Or (gold):

(thanks to my friend Mark Anthony Henderson for these examples. Mark is an IAAH Fellow of the International Association of Amateur Heralds)

These arms belong to William Charles (Trant) Fagan and/or his descendants.

Please be aware that just because you share the surname FAGAN, does not mean that these are your ''family' arms. As you can see above, several versions of arms were awarded to various individuals with the surname Fagan. Please don't fall for the whole 'family coat of arms' fantasy.