Various Historic Locations of the Fagans

According to The Irish Genealogical Foundation's Irish Genealogy Notes & Coats Series, [link]County Meath & Westmeath Genealogy, Fagan is one of the "Numerous Families from Westmeath" during the 19th century. During our research, we have come across the locations below as being the most common environs of the Fagans.

We recently received an email from the McGinley Clan Historian who pointed out that the Ó Fiacháin clan of Armagh were changed to Fagan as well. If anyone has more specific information about the Armagh Fagans that you're willing to share, please send it to This email address is being protected from spambots. You need JavaScript enabled to view it.. 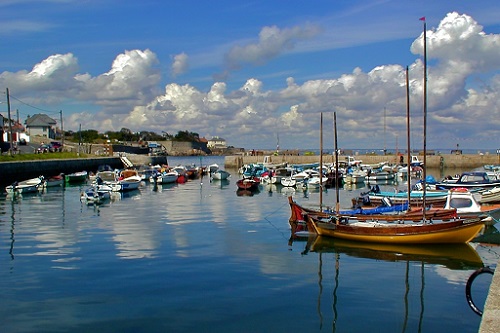 During the 16th century the Castle and the lands had been assigned by the Taibots to members of one of the great Dublin mercantile families of the day, the Fagans, whose principal residence was Feltrim, near Swords, and whose ancestors had been amongst the earliest English settlers; and we find amongst the members of the family in possession of Bullock, Christopher Fagan and his younger brother, Richard, each of whom filled the high position of Mayor of Dublin.

The name is written in the annals as Duibh-linn [Duvlin], which, in some of the Latin Lives of the saints, is translated Nigra therma, (black pool); it was originally the name of that part of the Liffey on which the city is built, and is sufficiently descriptive at the present day. In very early ages an artificial ford of hurdles was constructed across the Liffey, where the main road from Tara to Wicklow crossed the river; and the city that subsequently sprung up around it was called from this circumstance Ath-cliath [Ah-clee], or 'the ford of hurdles', which was the ancient name of Dublin. This name is still used by speakers of Irish in every part of Ireland; but they join it to Bally-Baile-atha-cliath (which they pronounce Blaa-clee), the town of the ford of the hurdles.

The Fagans are sometimes listed as being from "Derry Fagan, Faganstown, &c." Although we have not been able to find the whereabouts of 'Derry Fagan.'

The Killossery church in Fingal (Rowlestown, Co. Dublin) was mentioned in Fingal, 1603-60: Contending Neighbours in North Dublin, by Maighréad Ní Mhurchadha: "Richard Fagan who received a lease of the Great Farm in 1592 for 119 years was required to plant six ash-trees yearly." Richard was required to pay for the tithes of the farm "twenty pecks of good sound corn, viz., ten pecks of good sound wheat and bearmalt, and ten pecks of good sweet sound oatmalt of like measure as now they use to receive of all other farmers..."

"On the grange of Portmarnock, at left of the line, is an ancient fort about thirty-six feet in diameter ; and hereabouts, a view may be caught of the handsome chapel of Kinsaly, and the historic and picturesquely situated hill of FELTRIM, for centuries the residence of the Fagan family, now crowned with a large windmill, that forms a very conspicuous object from every direction."

Malahide is an ancient village, 16 kms. north of Dublin City on the east coast of Ireland. Paddy's Hill, overlooking Malahide Estuary, is the earliest evidence we have of a habitation site in the area C.6000 B.C. The Fir Domhnainn are also reputed to have settled here, where they remained "fishing and fowling" for a few hundred years. Tradition has it that St. Patrick visited the locality in 432 A.D. The Vikings landed in 795 A.D. and the Danes were resident in 897 A.D. McTurkill, the last Danish King of Dublin retired to Malahide in 1171, from whom the Normans took over in 1185. The modern name Malahide ( Mullagh h-Ide ) probably derives from this time, meaning the sandhills of the Hydes, a Norman family from the Donabate area. From the 12th century onwards, Malahide developed around the Talbot Castle. In 1547, it was described as one of the chief haven towns of Ireland because of its very safe harbour.

In 1475 Thomas Talbot, head of the Talbot family of Malahide Castle, was granted the title Admiral of the port of Malahide by King Edward IV, with power to hold admiralty courts and levy customs duties on all merchandise coming into the port. The office was hereditary, and the family's right to act as Admiral was confirmed by the Court of Exchequer (Ireland) in 16391.

Malahide is the home of the Grand Hotel, built in 1835 by Mr. James Fagan of Feltrim. He was a member of the British Parliament and when his Malahide Hotel was granted a royal warrant he decided to call it the ‘Royal Hotel’. His motivation for building the hotel was obviously influenced by the impending arrival of the railway in Malahide. With the awakening of Irish nationalism in the early 1900’s, the name was changed to the ‘Grand Hotel’.

There was mention of the town of Ó Fiacháin on the Black Oak river, now called Newport, but historically known as Ballyveaghan (Baile Uí Fhiacháin). Evidently back in 1719 a community of Quakers settled there and it was then known as Ballyveaghan. The ancestral home of Princess Grace of Monaco is located near Newport.

Trim Castle, the largest Anglo-Norman castle in Ireland, was constructed over a thirty-year period by Hugh de Lacy and his son Walter. Hugh de Lacy was granted the Liberty of Meath by King Henry II in 1172 in an attempt to curb the expansionist policies of Richard de Clare, (Strongbow).  Construction of the massive three storied Keep, the central stronghold of the castle, was begun c. 1176 on the site of an earlier wooden fortress. This massive twenty-sided tower, which is cruciform in shape, was protected by a ditch, curtain wall and moat. "John Fagan was High Sheriff of the Liberties of Meath: and in 1373, was appointed Governor of the important castle of the Pale at Trim.

According to the GoIreland site, in or near Cookstown in Tyrone is the Tullaghoge Fort and Inauguration Site:

"Tullaghoge is a prominent rounded hillock about half-way between Cookstown and Stewartstown, and it was there that the leading member of each O'Neill generation was inaugurated from the 11th to the close of the 16th century."

The name Tullaghoge comes from Tulach Óg meaning The Hill of Youth. The site has never been archaeologically excavated so the exact age and function of the initial activity at Tullaghoge is unknown. It is likely to date to some time in the early medieval period, between the seventh and ninth centuries.

Historical records tell us that the site was originally associated with Uí Tuirtre of Airgialla, and then

became the possession of the O’Hagan family. They lived at Tullaghoge and became the hereditary guardians of the symbolic site. The O’Hagans were clients of the powerful O’Neill dynasty, and during the middle and later medieval period, it was the O’Hagans who had the honour of inaugurating the O’Neill chiefs, proclaiming them as ‘The O’Neill’.

During the crowning ceremony at Tullaghoge, the King elect was seated on a stone inauguration chair known as the Leac na Ri. He swore oaths to rule by Brehon Law (the ancient laws of Ireland) and to give up the throne if he became too old or infirm to rule.

New sandals were placed on his feet by the chief of the O’Hagans and a golden sandal was ceremonially thrown over his head to indicate he would continue in the footsteps of his ancestors, and then the new king was handed the ceremonial rod of office. The primate of Armagh would then anoint and crown the O’Neill as chief and king.

Tullaghoge is just around 4km south of Cookstown in County Tyrone, off the B162 (Cookstown to Stewartstown Road), and you’ll see signposts for the site. There is a small area to park at the base of the hill, and a well made stone path leads nearly the whole way to the site. At the end of the path just pass through the small kissing-gate.