It may not look like much, but some of your ancestors may have lived here! 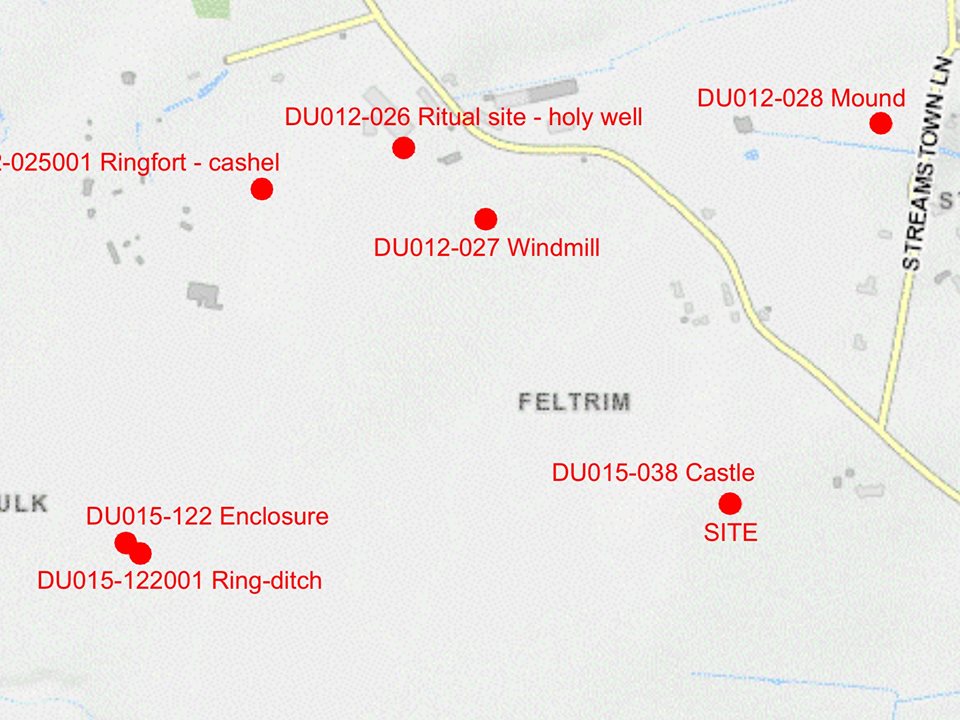 In 1429, King Henry VI of England granted £10 to any of his subjects who succeeded in building a 40-foot-high defensive tower by 1439 to help defend the part of Ireland under his rule known as The Pale. "Fagan’s Castle" in Feltrim Hill, North County Dublin, was one of these Ten Pound Castles. Maps from the sixteenth century further document that Fagan House was a prominent estate in Feltrim. Among its more celebrated residents were Christopher Fagan, Lord Mayor of Dublin, and his brother Richard, Sheriff of Dublin during the reign of Elizabeth I. Remains of Fagan House and Castle’s basement and possibly one of its original oak trees still remain.

Eamon Madden’s ancestors have been living in the area of Feltrim Hill since the 1630s. Eamon is also secretary of the Feltrim Hill Residents Association. In this role and thanks largely due to his efforts, the grounds of Feltrim House and associated buildings, including the Feltrim Hill Windmill, a Lime Kiln, and the Holy Well in addition to Fagan’s Castle, are being excavated.

In February 2016, on behalf of the residents’ association, Eamon contacted CRH Roadstone, Ireland’s largest supplier of construction materials, to request support to conduct an archaeological excavation of the site. CRH had been quarrying in Feltrim Hill since the 1950s and Eamon’s letter, which made the case for Feltrim Hill as a very important Neolithic and Christian site “steeped in history" had the desired impact. CRH undertook an initial dig and based on promising results from that dig, embarked on a second excavation.

In August of 2017, once again through the advocacy of our friend Eamon, the construction supply firm CRH Roadstone returned to resume work begun in February of 2016 excavating ruins of Fagan’s Castle and associated buildings in Feltrim. After Roadstone, under archaeologist Charles Mount, removed the topsoil at the start of the week, archaeologist Ian Russell led the field team at the site from Wednesday through Friday, August 16-18. With up to 4 archaeologists on the job at times, Ian’s team was able to clearly identify the foundations of a castle, even pinpointing the exact location of the front door! Over the 3 days, they mapped out an L-shaped structure but didn’t have time or license to expand the dig further. They were, however, able to conclusively date the wall and well of Feltrim House to no later than 1620-30, with the stone structure of the Castle dating from the 15th century, which meant that Fagan’s Castle must have been torn down or redone around the end of the 1500s and not the 1600s.

It’s known that King James of England spent the night with the Fagans in 1690 after the battle of the Boyne, but it could have been in a remodeled Castle or in the new Feltrim House. The English took a dim view of Christopher Fagan letting the Earl of Desmond in 1573 escape from prison in Feltrim to flee to Munster.

The team was enthusiastic about their findings despite the fact, as Ian said, that completing the project properly would require a team of 20 and several weeks. We are grateful to Eamon, CRH Roadstone, Charles, Ian, and the entire crew!

On March 17th, 2018, the Clans of Ireland announced Mr. Madden as a Companion of the Clans of Ireland Order of Merit. He was nominated and sponsored by the Fagan – Ó Faodhagáin Clan Association (ClanFagan.com) for his tireless efforts in discovering the remains of Fagan’s Castle, and in preserving the history of Feltrim!