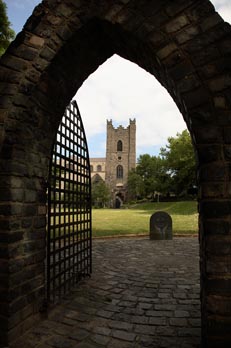 In January of 2012, I contacted the folks who take care of Saint Audoen's Park in Dublin. We had a very informative exchange if information about Fagan's Gate & Fagan's Tower (see Fagan's Tower).

Sean Redmond, the Executive Parks Superintendent has charge of Saint Audoen's Park, and did not realise that one of the gates to the park was called Fagan's Gate. He provided a picture of Fagan's Gate, which was constructed in the 1980s. It's known as Fagan's gate as Fagan's Castle/Tower was located "near [sic] this site". He attached a study of Saint Audoen's, and asked the City Archaeologist, Ruth Johnston, to send more detailed information.

Ms. Johnson also added comments from premier historian Professor Howard Clarke on the subject:
"There seem to be two Fagan sites. One is the mural tower (see tower) included in Perrot's survey, otherwise known as the Watch Tower, south of Newgate. The other is a gate in the original (inner) north wall west of St Audoens' Arch and linking Cornmarket with Cook Street. In Paddy Healy's catalogue ('Medieval Dublin', ed. Clarke, vol. 1, p. 190) it is stated to have been in Page's Court and that both passage and gate were still standing in 1788 (source not cited). But Rocque's map (1756) shows both Purcels Court and Padgets Alley as parallel lanes in that location, with a house blocking the lower (Cook Street) end in each case. I am not sure whether Paddy got this right. In any case, it would seem that the subject needs investigation. Archaeologically the whole lot is presumably buried underneath St Audoen's Park."

Quite a few of the older maps do indeed point to a 'gate' to the west of St. Audoen's (or St. Owen's) Gate in the north mural wall of Dublin. Some of the maps actually name this gate as 'Fagan's gate'.

The following description seems to start at St. Audoen's, then to the east to Fagan's (castle/gate/portal) and around to Newgate:

"St. Audöen's-gate was one of the portals in the ancient city wall, which extended from it north of St. Audöen's churchyard to a building called Fagan's castle (gate?) in Page's-court, where was another portal, and from thence they extended to Newgate. Pembridge, a writer from the fourteenth century, notices the existence, at that period of a tower over this gate, the erection of which some writers seem to have erroneously assigned to the year 1316."

As does this one:

"In the annals of Ireland publifhed by Camden at the end of his Britannia, afcribed by fome (a) to Philip Flatifbury, but by others, (b) more truly to Chriftopher Pembridge, it is faid, 'that the church of the dominicans (c) was in the year 1316 deftroyed by the mayor and citizens of Dublin, when they expected to be befeiged by Edward Bruce and the ftones converted to the building of the city walls, which were enlarged on the north part above Merchant's Quay; for that fornerly the walls ran by the church of St. Owen, where (proceeds Pembrige) we ftill fee a tower beyond the gate in the ftreet where the taverns are.' i.e. in Wine-tavern-ftreet. From this defcription given by Pembridge, fome judgment may be formed how the antiemt walls of the city were carried, namely, from Wine-tavern-gate along the fouth fide of Cook-street, till they joined Owen's-arch, which yet remains, and was a portal to the city, and from thence were continued north of Owen's church-yard to a caftle called Fagan's-caftle, in Page's-court, where was another portal, and from thence they extended to New-gate."
(a) Staniuft Defcrip. Hib. cap.7. (b) Ware de Script, cap. 10. et. 12. (c) On the Inn's-quay.

The History and Antiquities of the City of Dublin, from the Earliest Accounts Compiled from Authentick Memoirs, Offices of Record, .., by Walter Harris, Printed for Laurence Flinn; and James Williams, 1766, pp. 55–56

This old photograph shows an area that coincides with where Fagan's Gate would have been. If you look closely, the gate looks very similar to 'Fagan's Gate' which now stands in St. Audoen's Park

Descriptions from the past give us the location of Fagan's Tower (also called 'the Watch Tower').

The Dublin Historic Towns Atlas Vol.I records it as follows:

And from another source:

"From the towre in Mr. Sedgraves pocession to the towre in Mr. Richard Fagan [h]is pocession is 90 foote distant, and the wall agreeing in like height and thicknis as aforesaid, and no rampier within said parte of the wall, but the licke buttris without as befor. The said towre in Mr. Fagans pocession is a rounde towre withowt, and square within, and nether vawte no lofte, but a waye going upe unto the tope, being ten foote sqware upon the tope, with a garett and fyve lowps in the waye going upe, and the towre 32 foote hie and 2 foote thicke besydes the thicknis of the stayres."
"From the towre in Mr. Fagans pocession to the sowth-easte towre of the Newe gate is 120 foote distant, the wall 17 foote hies and fyve foot thicke, and no ramier within said wall, but howses joyning close to the said wall within, and the licke buttris with-owt the said wall, ad the other parte of the said wall hawe befor."

Calendar of Ancient Records of Dublin: in the Possession of the Municipal Corporation of That City, by John T. Gilbert, Vol. II, Joseph Dollard, 1891, p. 553. From Appendix II Circuit Walls of Dublin [1583]

---
I'd like to give my thanks to all who responded from Dublin and beyond. It appears that in the 1980s a NEW Fagan's gate was put in place near the spot where Fagan's Castle once stood. This is an ongoing bit of research so please check back!